There are many things in Florida which people consider dangerous - top of the list are alligators and poisonous snakes. Strange as it might seem, in my many hours and miles of hiking around Florida the most dangerous thing I have encountered is a cypress knee (defined as a distinctive structure in a root of a cypress tree which protrudes up from the ground). I have tripped over a few in my time, going flying to the ground. I have taken some pretty nasty falls tripping over a small "knee" in the green ground cover. My biggest fear always is that I will land full force on another knee sticking up. I have hit different parts of my body on "knees" as I've fallen, with some real mean resulting black and blue marks. I have been very lucky never to land on one in the chest or face, I think that could be a deadly situation! Another bad thing, not as bad as "knees", is roots and other obstacles found along a path. I have gone flying more than once when I tripped over something which I hadn't noticed on the trail. So rather than be obsessed with some critter getting you, be more concerned about taking a fall you might not get up from ;-) 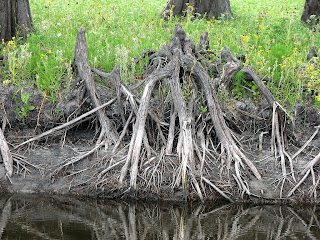 High water mark and some cypress knees hidden by the weeds 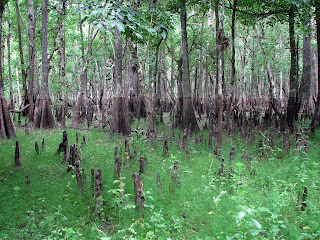 Some more cypress knees in the greens 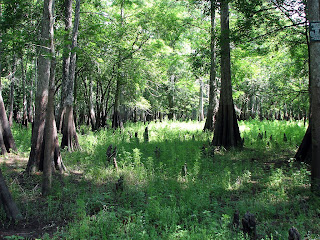 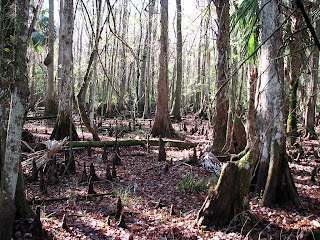