It seems that during my many miles of hiking wet areas I have come across a few water moccasins (cottonmouths). They all would have certainly done me in if they had a mind to. In all cases they just displayed their very deadly fangs as they opened their mouths as wide as they could. In each case I recognized why they are called “cottonmouths”! They never attempted to strike me, just warned me to stay back. I met some old-timers once and they have told me that there were a lot of water moccasins in Florida once upon a time and they would actually chase you. If you should encounter one of these snakes, or any snake for that matter, show it respect. I never harass them, taking a few pictures and moving on. If you see one, just go around it and I'm sure you will be alright - but always border on the side of caution! I have run into a few snakes during my hiking (not really that many considering where I go and how many miles I cover) that I now wear snake gaiters to protect me (when I remember too). I use a pretty expensive set, TurtleSkin SnakeArmor's snake protection gaiters, but there are cheaper ones out there.

This is a Water Moccasin I almost stepped on while hiking Moccasin Island Tract. I assume because it was a cool day that is why he didn’t strike at me. I looked down when taking a picture of a flower and there he was! I jumped back, he just kept threatening me until I moved on (click on pictures to enlarge). 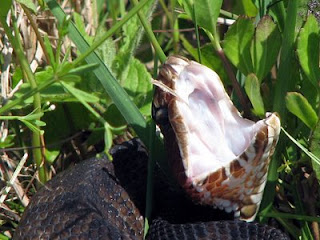 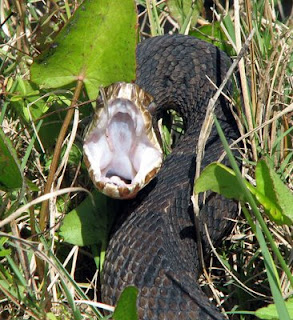 Another mean boy I ran across - if looks could kill I suspect I wouldn't be here! (click on pictures to enlarge) 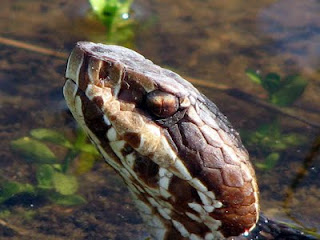 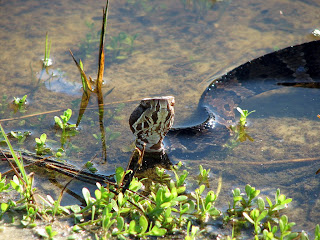 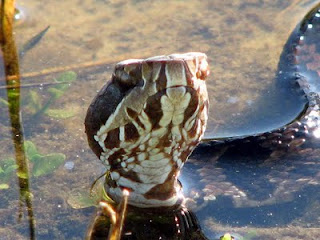 A smaller Water Moccasin I almost stepped on why hiking around the St Johns River - it was just as mean as the big boys. I'm sure if he could have, he would bitten me and made my life miserable. Two things I had going for me that day - it was cool and it was sluggish and I had on my very protective snake gaiters. (click on pictures to enlarge) 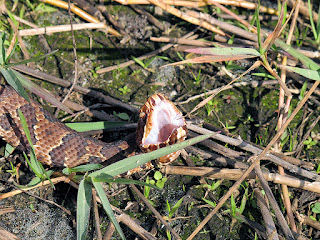 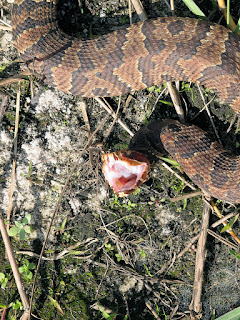 I almost stepped on this very fat water moccasin while hiking a swamp in the very northern section of the Tosohatchee WMA. He just slithered up to a small mound and opened his mouth to show me his very intimating fangs. It wasn’t that cool of a day, so not sure why he just stayed there. It was very dry in this wetland area this day, so maybe the lack of water made him a little docile. I was very happy that he didn’t attempt to test my snake gaiters! I took his picture and moved on. I only saw one other snake that day, a small green one. There may have been many out there, but I doubt it. It seems that they are part of what I call “nature’s demise”. (click on pictures to enlarge) 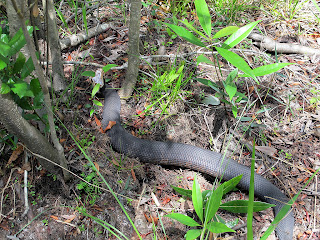 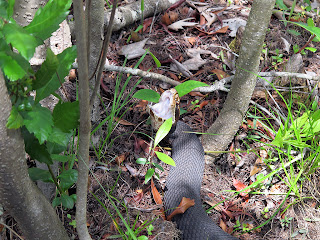 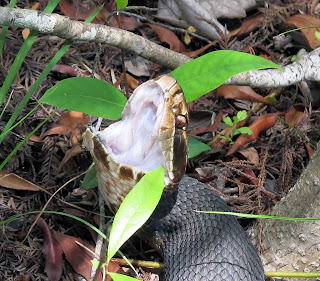 Hey Tom! Glad we haven't run across these guys the times I have hiked with you!

They are always there, just didn't notice them. Best way to hike is to just enjoy the trail and forget about things that really aren't there to harm you - out of sight, out of mind!