Overview
The boundaries of the Three Forks Marsh area establish a perimeter around more than 52,000 acres extending to land on both the east and west sides of the St Johns River. The land on the west side of the river is generally wetlands with marshes, with some major cypress domes. The land on the east side of the river consists mainly of levees and marshes, crisscrossed with canals. Like everywhere in Florida there is a lot of history in this area, but also like most of Florida, it has been lost. The land once contained old homesteads, a major railroad (Union Cypress Railroad) and many other things. If you look closely you will see some remnants of the Union Cypress Railroad in different areas – pilings and the raised track bed. I suggest if you want to know more about the history of the area, check the Internet. SJRWMD has divided the area into different segments; see their maps to determine the name of each segment. Hunting is allowed in many of the areas, so always be aware of any hunting activity going on at the time of your visit. Also, on the west side of the river you will come across many airboat trails. Depending on the time of the year you can either boat them (high water) or walk them (low water). In either case, always be aware of airboats as the airboat operators have a tough time spotting you down at water level. I have come across a few water moccasin snakes out there (in wet areas), so be prepared for that (I wear snake gaiters). Water moccasins (also called cottonmouths) can be aggressive and very deadly, so be cautious. There are some huge alligators around this area, so be aware of them. It is the alligator you don’t see that is the most dangerous one! Keep yourself, your family and your dogs away from the edge of the water! If you are in Three Forks at the right time of the year you should be able to find a variety of wildflowers. In at least one of my visits I encountered some very picturesque water lilies. Certain levees are closed to the public, keep your eyes open for signs. I took the wrong levee during a visit in March of 2012 and was given a ticket. The St Johns River cuts right through the property, this is a great way to access many of the segments which makeup Three Forks Marsh. You can launch a small boat, kayak or airboat from Cape Holly on RT192 and head down the river. There are a number of places to come ashore and explore the area. If you look at my Google Earth/Panoramio pictures you will see many of the areas I have visited. Many of the canals and little creeks leading into the river can be choked with water hyacinth, thus inaccessible by motorboat. There are a number of campsites, day shelters and cabins located within the boundaries of the Three Forks Marsh. The campsites are mainly tent platforms with firepits. The shelters are wooden structures; they are for day use only. I’m not sure about the two cabins located on Bulldozer Canal, they may be private. Many of the campsites are occupied throughout the hunting season. Weekend hunters, as well as guides take over a campsite. All the campsites are under the control of the SJRWMD. I have visited most of the campsites and shelters. During my visits I did notice that many of them were in poor shape, I hope that funding is available to repair what either man or nature has damaged. It seems that the SJRWMD had money to build very nice campsites and shelters, but don’t have the money to maintain them! See below a list of the shelters and campsites. I am going to just give a little information about the different sections the Three Forks I have visited. I wish to thank Shawn Riley (www.outintheboonies.com) for showing me many of the sides of Three Forks, as well as many of the historical sites still not bulldozed under. I have created separate entries about some of the areas listed below – see the links to them for more Information.

Thomas O. Lawton Recreation Area
This area is located at the end Malabar Road. It was designed originally as a northerly access point to Three Forks Marsh and a public recreation area. There is a large parking area, a boat launch and some picnic tables provided at the actual recreation area. You can hike and bike out on to the levees from this spot. Launching other than airboats wasn’t available at the boat launch when I was there because the controlling organizations hadn’t cleared out the channel to the river. Levee access might be restricted, so watch the signs. I was told that the whole area will beopen in 2014. I wish I could recommend this area, but during my March 2012 visit I found the area in very poor condition. I hope that SJRWMD finds the time and money to bring it back to its original condition. If you should find it improved, please let me know. The levees you can hike/bike should be marked with hikers icon sign, watch for that. The main levee south is located just outside the entrance to the parking area.

Sweetwater Drive/RT 192
There is a gate on Sweetwater Drive which is off RT192 where you can access the levee into Three Forks. When I tried to access from this gate in 2012 it was marked as “closed”, so until they change the status of this access point, avoid it. Like all the levees in Three Forks, it is patrolled by a security firm employed by the SJRWMD. When it does get open it will be a very nice way to access this section of Three Forks. You will be up near the main canal and into one of the sections which actually has some trees. This is where you will find areas labeled “Indian Fields”. I do not know much about those, but you may want to do more research about them if you are interested. If you’re into kayaking, you can kayak down the canal from Sweetwater Drive into Three Forks. There are a couple of crossovers, but they are doable. The canal itself is very pretty, containing some very pretty flowers at times. As with all water areas, be aware of the residing wildlife – mainly alligators and snakes.

T.M. Goodwin Waterfowl Management Area
This is an area designated mainly for waterfowl hunting, accessed from Babcock St down near Fellsmere. Like all of Three Forks it is made up of levees and marshes. There is an observation tower and a picnic area located in this area. Hiking and biking is allowed from this access point. As with all of Three Forks, be aware of the hunting seasons. During certain days of the week you can drive out to the observation tower. Check with the documents supplied by SJRWMD for more information about that. The observation tower is quite high and provides a nice view of the area.
To read more about the T.M. Goodwin Waterfowl Management Area - Click Here

St Johns River
Being that the Three Forks Conservation Area is divided by the river, there are many access points. The only problem is that you need some kind of watercraft. I have heard of people kayaking up the river and back, but that can be a brutal paddle. There are a couple of lakes formed by the river which must be crossed. I have done them in a motorboat and that was bad enough, I cannot image doing it in a kayak! I’m told you could kayak over from the boat launch at Thomas Lawton Recreation Area. The best watercraft is an airboat, they can go just about anywhere it is flat, wet or dry! A small motorboat is nice, but that doesn’t work during low water or when there are heavy concentrations of water plants choking the waterway. There are a number of day shelters and campsites which are easily accessible from the river. Many times I have found campsites full with tents that are placed there by hunters during the season. If you explore enough, you will find many airboat “trails”. These are well worn trails created by airboaters as they access the areas. As I mentioned earlier, airboats can go anywhere where the land is flat. The trails area mainly used to allow them access to areas for sightseeing, group meetings and hunting. Whenever down near the river always be both aware and cautious of airboats, they go very fast and ride very high! I have stopped at many places along the river and hiked in to enjoy the area. I have seen some pretty big alligators along the river. They never bothered us, but you might want to carry a small club just in case. This part of Three Forks is certainly my favorite part.

Bulldozer Canal Section
There is a manmade canal which leads off the St Johns River, allowing access to the western section of the Three Forks. This is the lower, wetter undeveloped section of Three Forks. Access is available using the airboat trails which crisscross the wetlands. Foot access is only available during the dry season, during the wet season the area is underwater. I have been there during both seasons, during the wet season we used a small outboard motor craft with no problem. During the dry season we hiked around the area. Even during the dry season, many areas where still underwater and not accessible. You should be able to see watermarks on the cypress tress to see how high the water does get. Three Forks boarders the Kempfer Ranch down in this section, make sure you don’t go on their property. Most all the surrounding land is private; don’t even think about going on private property! Like all of Three Forks, this is a highly hunted area. I suggest you avoid the area entirely during certain hunting times. Of all the areas of Three Forks that I have visited, I enjoyed this area the most. There are a couple of cabins located on Bulldozer Canal, as well as primitive campsites. There is one very nice campsite (Spade Island) located inland a little. The cypress tree domes are quite picturesque to visit.
To read more about the Bulldozer Canal Section - Click Here

Summary
• Huge area with many access points
• Many ecosystems can be found – during wet season you will see one world, during dry season another
• The levee area is mainly open and flat, good for biking, but can be boring for walking
• Western section of the area is all wetlands and cypress domes – access is by water only
• The type of wildlife you will see will depend on what section you are visiting
• Hunting is quite liberal, always be aware of the local hunting dates
• Water lilies and other wildflowers may be found at different times
• Airboats are quite popular in the area, so if near the St Johns be aware of them
• Some areas are so overgrown you cannot get to them if you wanted
• Some areas may be closed, do not access closed levees or private property
• If you look around the northern section you will see remnants of the old Union Cypress Railroad
• A lot of alligators and poisonous snakes can be found in the area. Don’t be afraid of them, just respect them
• Bring plenty of water and sunscreen 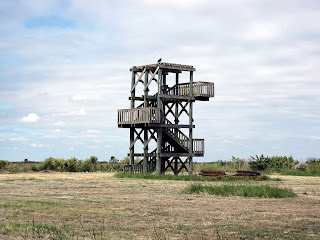 High Water In Marsh On West Side of St Johns River 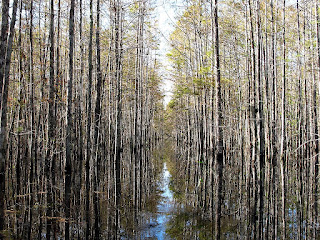 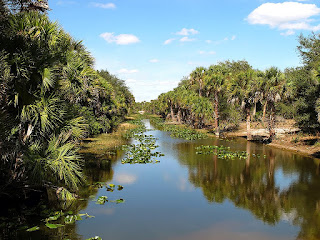 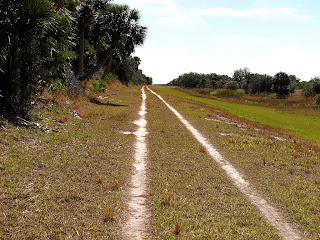 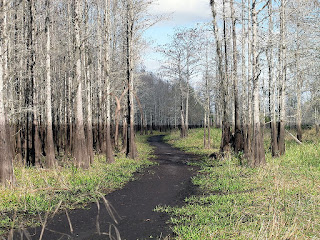 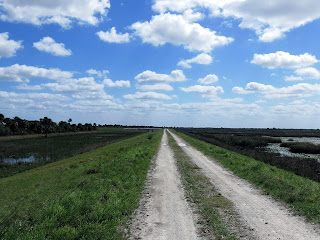 Being new to Florida, a friend told us to go to Three Forks Marsh Conservation Area. I took my family there for the first time. And it was wonderful.