The Pine Island Conservation Area is made up of 950 acres of a variety of Eco-Systems. The area is controlled by both the EEL and SJRWMD groups. There are a number of old roads and trails which can be hiked and biked. There are no fees for using any of the Pine Island Conservation area. The area did contain old homesteads once upon a time; the old roads are remnants of the previous inhabitants. You will also encounter canals and water areas which were created by the early homesteaders. I have been on just about all the trails which are marked in some fashion or are recognized as just old roads. The area is basically divided into three sections, with the main two sections divided by the Pine Island Canal which leads to the Indian River. There is only one foot bridge over the canal between the main parking area and the Indian River. You can drive over the Pine Island Canal at the main entrance. I designated the three sections as, the section north of the Pine Island canal, the section south of the Pine Island canal and the area around the historical Sams House. There are three designated parking areas which allow you to access to all three sections. The parking areas are pretty close to each other, so parking in any of the three spots will allow access to the complete conservation area and even the Sams House nature trails. GPS coordinates for the parking areas are listed at the end of this review. The best access to the Sams House Nature Trails is from the Sams House Historical Site located off N Tropical Trail. Hours are limited, so check ahead before you visit. If the area is closed, than you must access the trails from the Pine Island Conservation Area.

Northern Section
This is the area north of the Pine Island Canal which cuts through the conservation area. This area contains a number of old roads and trails. When I visited the area, only a few of the roads/trails were actually marked in any fashion. The land managers have cleared much of the land near the waterway which is just above the main parking area. You can park and launch a non-motorized boat, kayak or canoe from a place they have provided. I headed north from the parking spot, then out a road/trail to the Indian River. The day I was there, there were some boy scouts camping out at an area provided for that purpose up near the river. I then took another road/trail south down to the powerlines and the main canal. The road/trail wasn’t blazed, but it was an old road and easy to follow. I got some nice pictures along that road/trail. You should also notice some old telephone poles along the way, some more remnants of the original homesteaders. Once you get down to the canal, you have to follow the trail/road along it until you hit the only bridge over it. At that point you can take a short, newer trail created by the Sierra Club over to the Indian River. The Sierra Club has provided benches for you to take a break on. The trail from the bridge north is a loop which will take you up to an old observation platform, where you can get a look out over one of the bodies of water found in the Conservation Area. As you go up the trail you should keep your eyes open for a huge Bald Eagle’s nest which is right near the trail. You will also see some old and new trail markers, as well as old information stands along the trail. I hope that this and the other trails are on the agenda of the EEL group to restore, as they are very nice. There are no boardwalks on any of the older trails, so you might encounter some mud and water at times. Once you are done with the loop, I suggest you cross the bridge over the canal and head back to the parking area using the road/trail next to the canal. Total distance is a little less than 6 miles.

Southern Section
The section below the Pine Island Canal is what I call the “southern” section. This area has a few marked trails and many accesses to a large body of water and also Sams/Rinker Canal. You can launch a non-motorized boat into the large inland body of water. You could also drag a boat over to Sams/Rinker Canal and launch it there to have access to the Indian River. I did see some fisherman in the area of the canal, but they didn’t appear to have much action going on.. The activity around both water areas is certainly much heavier on weekends than during the week. There are some short trails and roads which you can venture on around the water areas. The nicer hike is to take the road/trail from the main parking area out along the Pine Island canal to the Indian River and then head south; following what seems to be a game trail through the grass. You can only go so far south and then you have to loop back east. You will come to a junction, take the trail south for as far as you can go – eventually you will hit a wetlands area, which can be quite muddy at times. As far as I can figure out, that is as far as you are allowed to go. Head back north and at the junction go due north and shortly you will come back to the road/trail next to the Pine Island Canal. If you haven’t hiked any of the northern section yet, take this opportunity to cross the bridge and venture into that area. Eventually, you will have to come back to the road/trail next to the Pine Island canal because that is the only way back to the parking area. As you venture through the trails I’ve mentioned you will see old trail markers, as well as old local information stations. Hopefully, the EEL people will get the resources someday to refresh the markers along these nice trails. If you look hard enough you will also see some remnants from the original homesteaders. One thing that did stick out where some wide wooden bridges used to cross some canals. Like all of Florida history, much of it has been bulldozed under, but sometimes you are fortunate enough to spot a few historical items.

Sams House Nature Trails
The EEL Group have invested a great deal of time and money in developing well blazed trails which they have associated with their main attraction “Sams House”. The trails are best accessed from the Sams House tourist site off North Tropical Trail. The only problem with that access point is that it has limited access hours, when this was written, Thursday through Sunday. You can always access the trails from the Pine Island Conservation Area. The garnet blazed trail can be picked up just south of the large body of water below the boating parking area. To get to the trailhead, head south on what appears to be an old dirt road next to the pond. Just look for an opening on a small mound and follow the trail south. You will notice the trail marker poles that the EEL people elected to use. The trail winds South through some very picturesque areas. You will see salt marshes, Spanish moss covered trees, major palmettos, manmade canals and many other Florida related items and scenes. I did see a very large gator in one of the marshes. The EEL people have constructed boardwalks over most of the very wet areas. The garnet blazed trail eventually meets the white blazed loop trail. I suggest going to the right until you hit the blue blazed trail. Take that out to a scenic overlook of the Indian River. You have to backtrack along the blue blazed trail until you hit the white blazed trail again. Take the white blazed trail to the actual Sams House tourist area. If Sams House is open, I recommend a walk around the attractions provide in that area. You will be glad you took the time to do so. There is a short red blazed trail off the concrete walkway which will take to a spot where you can observe an active Bald Eagles nest. The day I was there one of the beautiful parents was sitting on a branch near the nest. Next, continue back on the white blazed trail, bearing to the right until you hit the garnet blazed trail. This will lead you back up North to the Pine Island Conservation Area. Based on my explorations in early 2013, these were the trails that you certainly should venture onto.

General Notes
The Pine Island Conservation area is made up of many salt marshes, so always be aware of the main problem and that is salt marsh mosquitoes! Salt marsh mosquitoes are the worst mosquitoes you can encounter as far as I am concerned! If it is warm, you will encounter bugs, so be prepared. Also, most of the trails are in the open, so wear sunscreen to protect you at all times. I didn’t see much wildlife during my visit, but I really went for the hike and stayed mostly on the trails, so the animals may have avoided me. I did see one huge gator down along the garnet blazed trail of the Sams House nature trails. I had visited the area back in January 2005. I had photographed a large variety of wildflowers during that visit. I encountered a very limited variety of wildflowers during my visit in January 2013. I have encountered this problem all over central Florida, for some reason the wildflowers seem to be disappearing. Bicycling and horseback riding is allowed, but only on the roadways – stay off the trails! I did all the trails in two visits, first time I did the northern section and then a few days later the southern section and the Sams House Nature Trails. There certainly was a lot more activity going on during my weekend visit. During my weekday visit I had much of the area to myself.

Conclusion
The Pine Island Conservation area is a very nice place to spend some time. The trails and old roads are very comfortable to walk. There are numerous places where you can get views of the Indian River. I wish I could say that the fishing was great, but I do not believe that to be the case. From some locations you can see manatees. The variety of wildlife and wildflowers you will encounter depends on what season you visit.

Road Up Next to Pond - 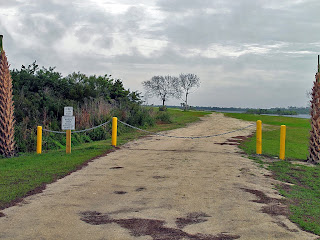 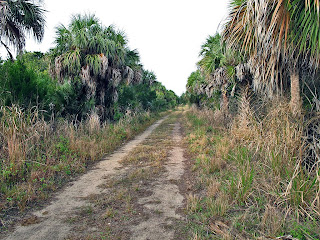 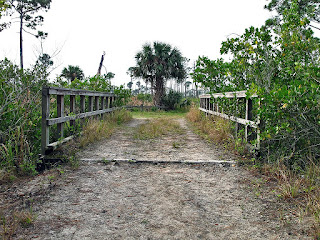 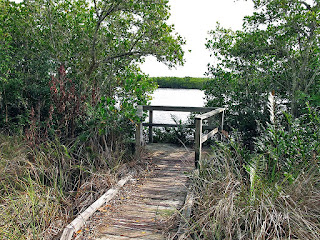 Tall Pines In The Palmettos - 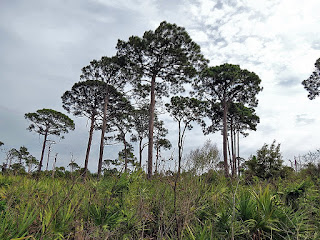 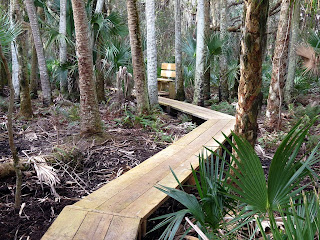 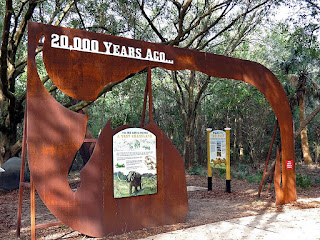 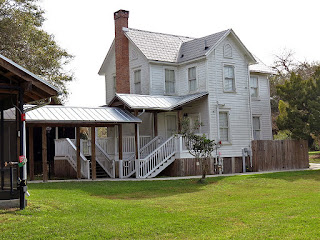